Is Your Stomach Ache from Food Poisoning or a Stomach Bug? 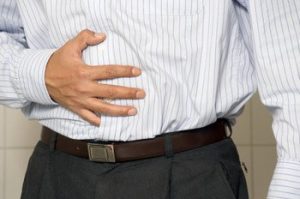 We’ve all had those days when your stomach is twisting and churning…unsure if you just ate some bad seafood or if you’re feeling the symptoms of the stomach flu. Take a look at the differences below and learn ways to keep your belly happy.

What is Food Poisoning?

Food poisoning is an illness caused by bacteria or other toxins in food and causes vomiting and/or diarrhea. Food poisoning causes an estimated 48 million illnesses, 128,000 hospitalizations and 3,000 deaths each year in the United States, according to the Centers for Disease Control and Prevention. It’s difficult to tell the difference between food poisoning and the flu because they both have very similar symptoms.

How Does Food Become Contaminated?

Viral Gastroenteritis (aka: The Stomach Bug)

The stomach bug, also known as the stomach flu or viral gastroenteritis, is unrelated to influenza viruses which cause respiratory illnesses as opposed to gastrointestinal. Gastroenteritis refers to the inflammation of the stomach and intestines and the most common cause in the U.S. is from the norovirus which spreads easily and quickly.

How Does the Stomach Bug Spread?

These viruses are transmitted through the fecal-oral route and can also be transmitted by ingesting contaminated food or liquids. The norovirus can survive on household surfaces for up to 2 weeks and can even survive some disinfectants, making it difficult to eradicate. Gastroenteritis symptoms include nausea, vomiting, stomach cramps and diarrhea.

Food poisoning and the flu can be very serious, and it can be extremely difficult to know for sure which illness you have, so it is best to be cautious and assume you are contagious. If you or a loved one is experiencing any of the above symptoms, visit one of our eMedical Urgent Care offices in Berkeley Heights or Middletown, NJ to discuss your history, review symptoms and evaluate complications of vomiting and diarrhea such as dehydration. We will help diagnose and treat you to make you feel like yourself again! Learn more about our services by contacting us today! eMedical Urgent care is a great alternative when your primary care provider is not available. We can electronically send your visit information to your primary care provider upon request.